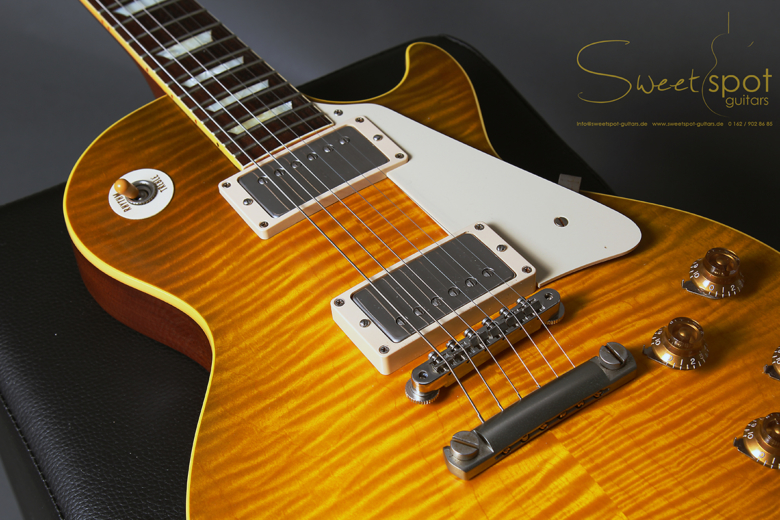 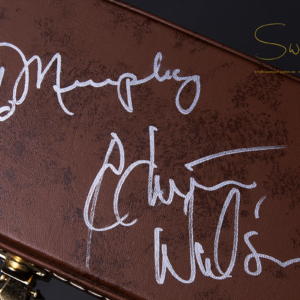 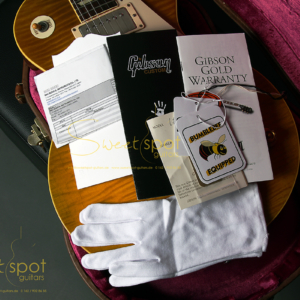 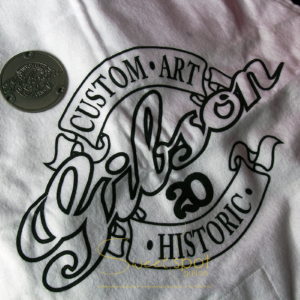 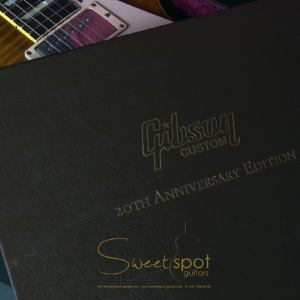 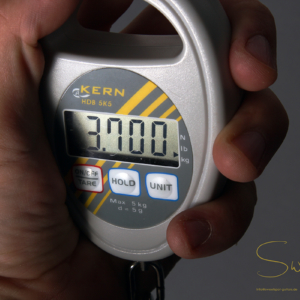 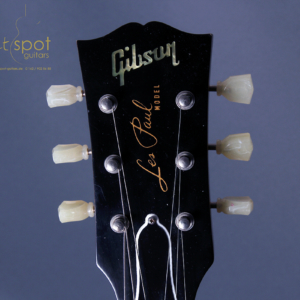 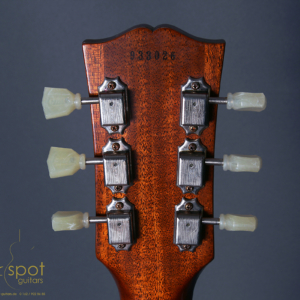 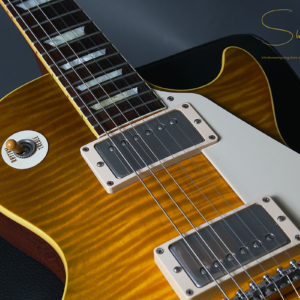 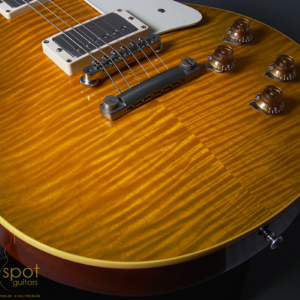 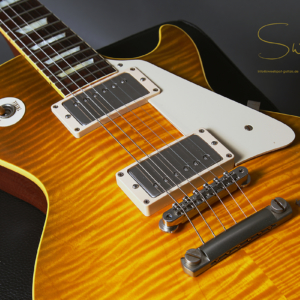 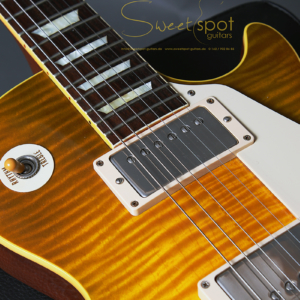 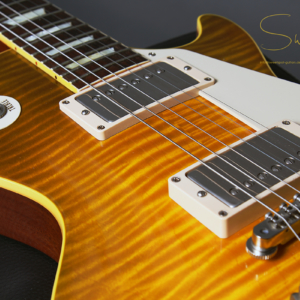 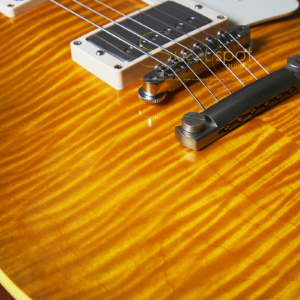 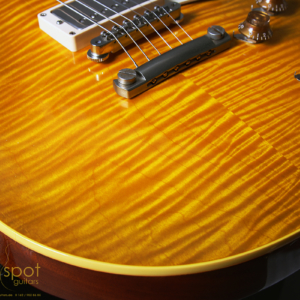 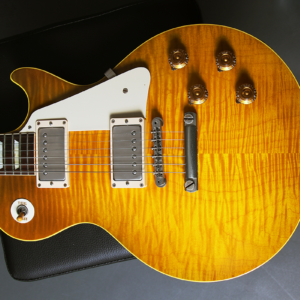 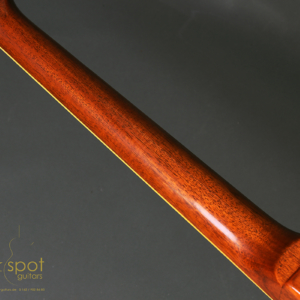 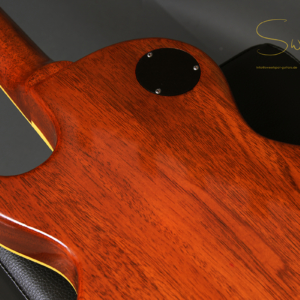 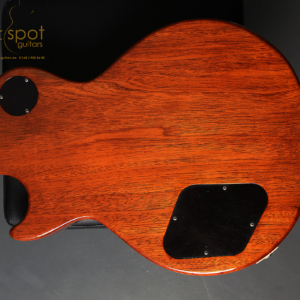 To celebrate the 20th Anniversary of its Historic Reissue Series, Gibson Custom has already rolled out three very special guitars—and as the close of 2013 approaches, Gibson Custom is pleased to present the zenith of the Les Paul 20th Anniversary Collection: the stunningly accurate 20th Anniversary 1959 Les Paul Standard Reissue. This limited run of 50 guitars represents the culmination of the Historic Reissue program’s steady evolution toward the most exacting, period-correct ’59 Les Paul Standards ever produced. The many revised and rediscovered techniques result in a guitar that looks, feels, and sounds like a vintage original.

For the first time in many years, both Edwin Wilson and Tom Murphy worked side by side to select 100 guitar tops and develop the sunburst finish specifically for this run. Tom Murphy sprayed each burst as he did when the Historic Series first began in 1993. In addition, the 20th Anniversary 1959 Les Paul Standard Reissue benefits from the entire spectrum of Gibson Custom’s 20th Anniversary Specifications for 2013. These include a one-piece rosewood fingerboard, Reissue Kluson™ Deluxe “green key” tuners, hot-hide neck glue, a Historic Truss Rod assembly with no tubing, accurate body and fingerboard binding color, new Custom Buckers created in the image of the original PAFs, and period-correct Red Aniline dye beneath its nitrocellulose lacquer finish—the latter treated to Gibson Custom’s proprietary VOS process for a gently worn look and feel.

Gibson Custom’s new Custom Bucker accurately recreates the original PAFs of the late ’50s, using Alnico III magnets and unequal turns of 42 AWG wire in each coil for that characteristic PAF clarity and “bite.” These pickups clean up beautifully at the guitar’s volume controls, while “Bumble Bee” tone caps assist in creating that warm, singing “woman tone” when you roll back the tone controls.

To really make this celebration one for the history books, Gibson Custom also includes a wealth of 20th Anniversary collateral: a “retro” logo dust cover, commemorative stamped “20th Anniversary” toggle switch access cover medallion (with a spare historic plastic cover in the case), hand-written Certificate of Authenticity print, and a pair of white gloves for those who want to use extra caution when handling this rare piece of history. Alternatively, take off the white gloves and play it like crazy—the 20th Anniversary 1959 Les Paul Standard Reissue is virtually indistinguishable from an original burst’s unrivalled feel and sublime tone. Now’s your chance to claim a piece of history at your authorized Gibson Custom dealer.

The body of the 20th Anniversary 1959 Les Paul Standard Reissue is made from a single piece of solid, lightweight mahogany topped with a beautifully figured maple top hand-selected by Edwin Wilson and Tom Murphy. The neck is made from solid quarter-sawn mahogany and carved to the beloved ’59 profile, then topped with a one-piece rosewood fingerboard featuring aged celluloid trapezoid inlays. The guitar’s top is finished in a luscious gently faded sunburst dubbed “Murphy burst,” with genuine red aniline dye on the back and neck, all in nitrocellulose lacquer.

The original PAF humbucking pickups are a crucial part of the “burst tone” in any original late-’50s Les Paul, and Gibson Custom created its Custom Buckers to capture all the sonic glory of the originals. Made with Alnico III magnets, with coils scatter-wound to precision specs, these pickups are essentially clones of the originals. They’re routed through the traditional four-knob control section with CTS™ potentiometers and a three-way Switchcraft™ switch, with tone shaped by “bumble bee” tone capacitors.

Each 20th Anniversary 1959 Les Paul Standard Reissue is backed by Gibson Custom’s Limited Lifetime Warranty with 24/7/365 Customer Service, and will include a Custom Shop hardshell case and owner’s manual, a “retro” logo dust cover, a pair of while gloves, a commemorative stamped “20th Anniversary” toggle switch access cover medallion (with a spare historic plastic cover in the case), and hand-written Certificate of Authenticity print.