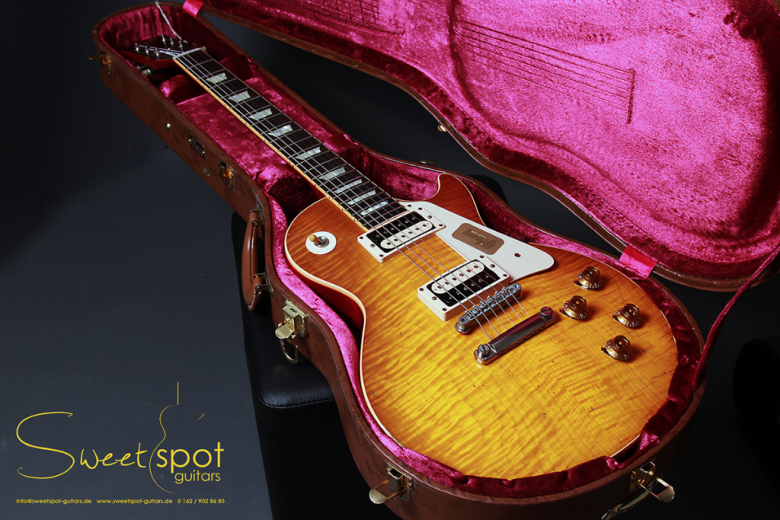 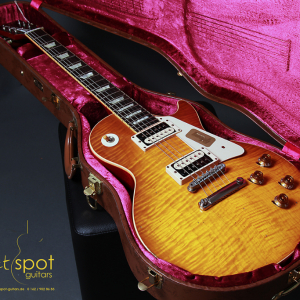 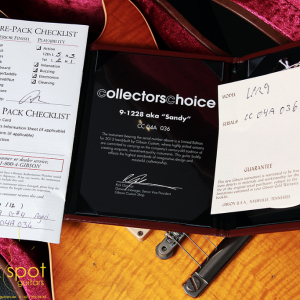 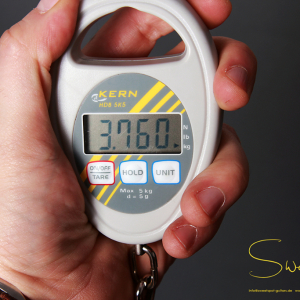 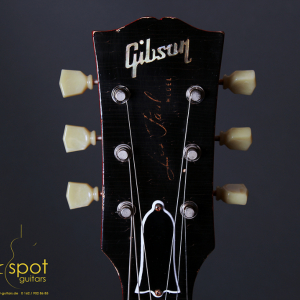 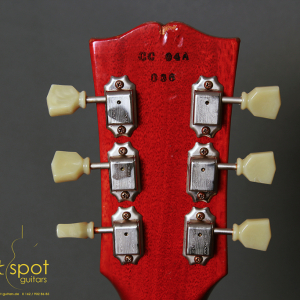 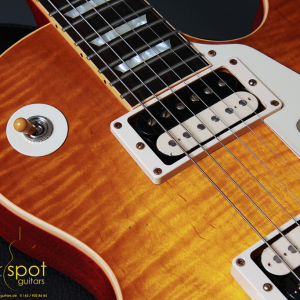 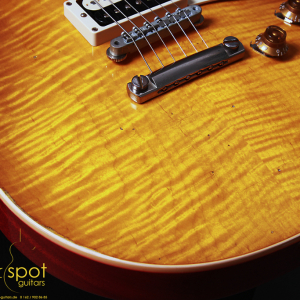 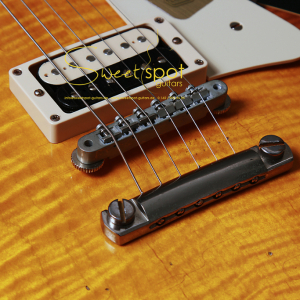 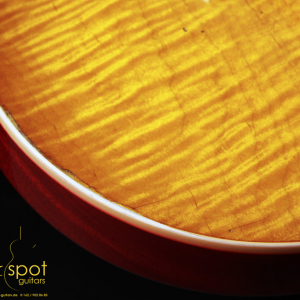 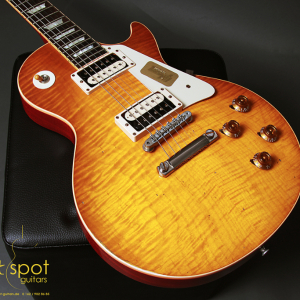 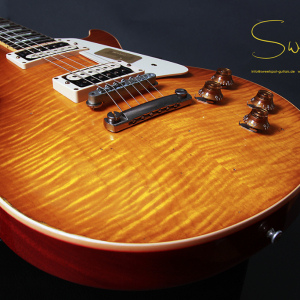 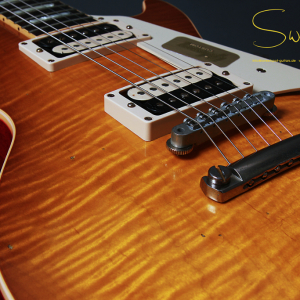 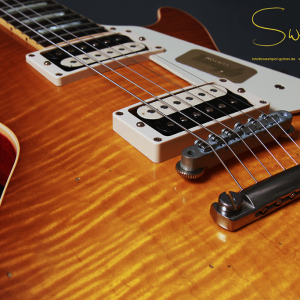 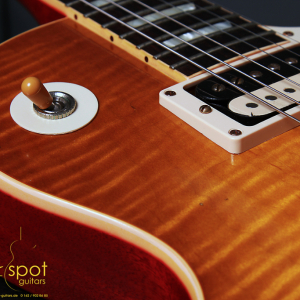 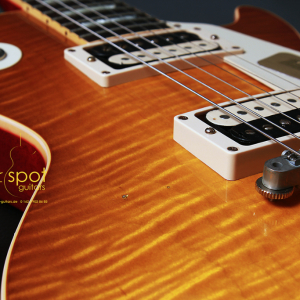 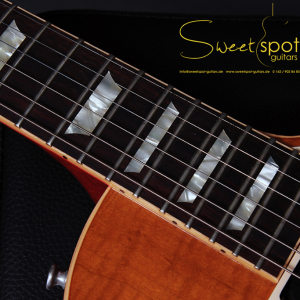 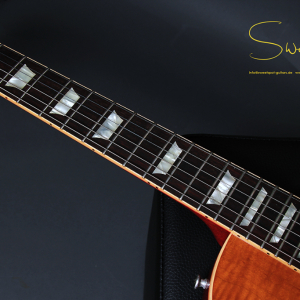 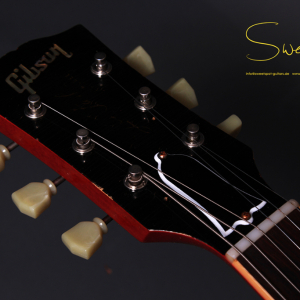 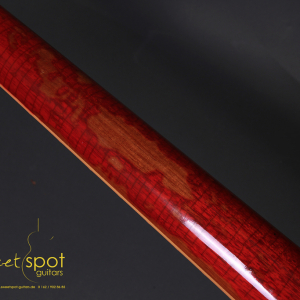 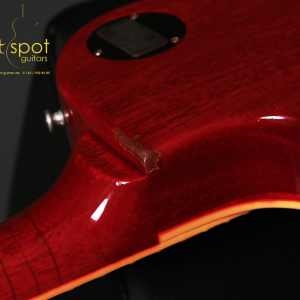 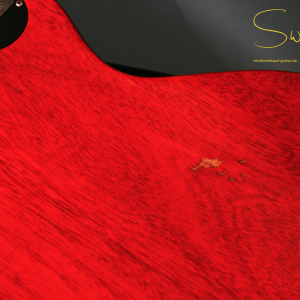 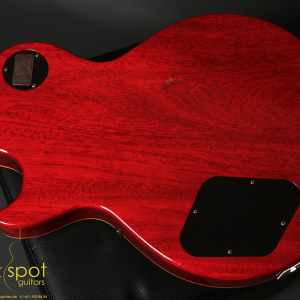 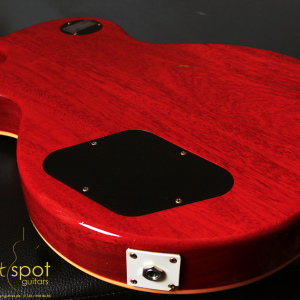 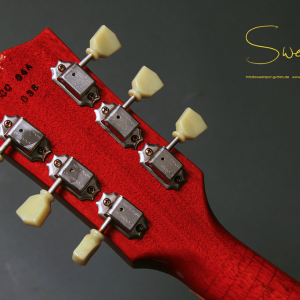 The Collector’s Choice™ series by Gibson Custom offers the most avid fans of Gibson’s legacy the chance of owning a piece of history, through the precise and exacting replication of a series of prized original sunburst Les Paul Standards. As a result, each Collector’s Choice™ guitar represents the closest thing possible to owning one of the best of the best of a rare run of guitars made between 1958 and 1960 that is already recognized as the most desirable production model in the history of the electric guitar. Collector’s Choice™ #4 1959 Les Paul „Sandy“ is again the result of intense study, scanning and hands-on examination of the original guitar, an amazing 1959 Les Paul Standard that offers many of the most desirable features of the breed. From its lusciously faded „dirty lemon“ finish over a beautifully and tightly grained figured maple top, to its sublime neck profile, to its remarkable zebra-coil PAF humbucking pickups—all recreated in precise detail with significant time and attention devoted by the original guitar’s owner, Tom Wittrock — Collector’s Choice™ #4 1959 Les Paul „Sandy“ is a true wonder to behold, and brings you as close to the look, feel and tone of the original as is physically possible. As with all Collector’s Choice™ guitars, „Sandy“ will be available in strictly limited numbers, with a maximum run of 300, with the availability of qualifying materials ultimately determining the final number.

While all late ’50s Les Paul Standards are highly sought after, and extremely valuable, Collector’s Choice™ #4 1959 Les Paul „Sandy“ truly represents many of the most desirable characteristics of the breed. „So many things were right on this guitar,“ said Edwin Wilson, head of Gibson Custom’s Historic program, during his analysis of the guitar. „Sandy plays beautifully; the neck is really comfortable with just the right amount of ‚beef‘ to it and a fairly low neck pitch so the strings feel almost like butter. One of the more stand-out features about Sandy is the curly eastern hard maple top. It is absolutely a knockout! The flame on this guitar is not very wide, but its crossing in and out on itself makes it one of the most intense and busy tops we have copied. Overall, this guitar is really the perfect example of a great 1959 Les Paul Model guitar, making the Collector’s Choice™ #4 1959 Les Paul „Sandy“ an honor to reproduce.“

In order to bring this limited run reproduction as close to the original as is humanly possible, Gibson Custom has examined and measured every significant detail of this prized 1959 Les Paul, and digitally scanned it to precisely replicate internal dimensions as well. Fine details of the reproduction include precise neck and top carves; closely matched maple grains for the guitar’s exquisite top; exposed zebra-coil humbuckers with Alnico 3 magnets, accurate coil winds, and offset square-window bobbins; and wear patterns that capture the current state of „Sandy“ near to perfection. In addition to accurately replicating the faded „dirty lemon“ sunburst finish, Gibson Custom even replicates the lacquer over-spray that a previous owner ordered for the neck to preserve it from further wear. For players and collectors seeking the look, feel and tone of a singular, well-loved, and well-documented 1959 Les Paul Model, and not just another „reissue“ guitar, Collector’s Choice™ #4 1959 Les Paul „Sandy“ presents an unparalleled opportunity.

The guitar will be produced in no fewer than 25 and no more than 300 examples (a further 50 guitars will receive the VOS treatment) and each will include a silkscreened Custom Shop case and owner’s manual, a Custom Shop Collector’s Choice™ #4 Certificate of Authenticity and Gibson Custom’s Limited Lifetime Warranty and 24/7/365 Customer Service.